Are you dreaming of a glamorous, contemporary wedding with laid-back vibes? Well look no further, because this wedding is a masterclass in how to mix high-end with highstreet, as well as DIY planning and styling with some super suppliers. Emmett and Sarah chose to tie the knot at romantic No. 25 Fitzwilliam Place in Dublin city, in a wedding that was small and perfectly formed. Think modern monochrome fantasy with a touch of Gatsby thrown in! The images by Wild Things Wed are beautiful, especially the late night photos that make us want to take to the streets of Dublin for our own night-time photoshoot. See for yourself below! 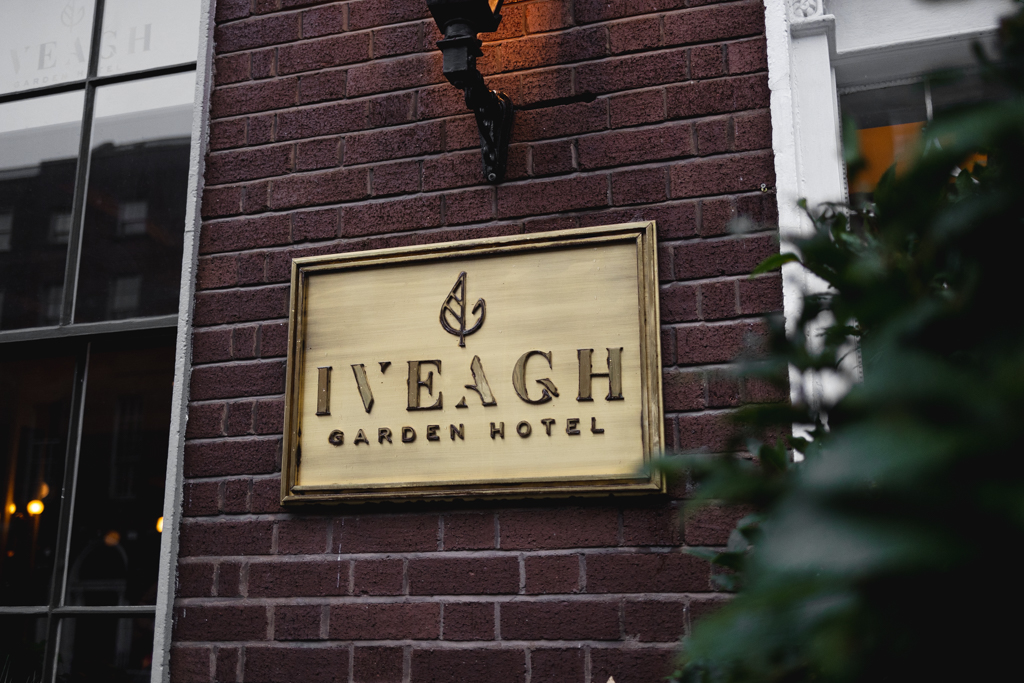 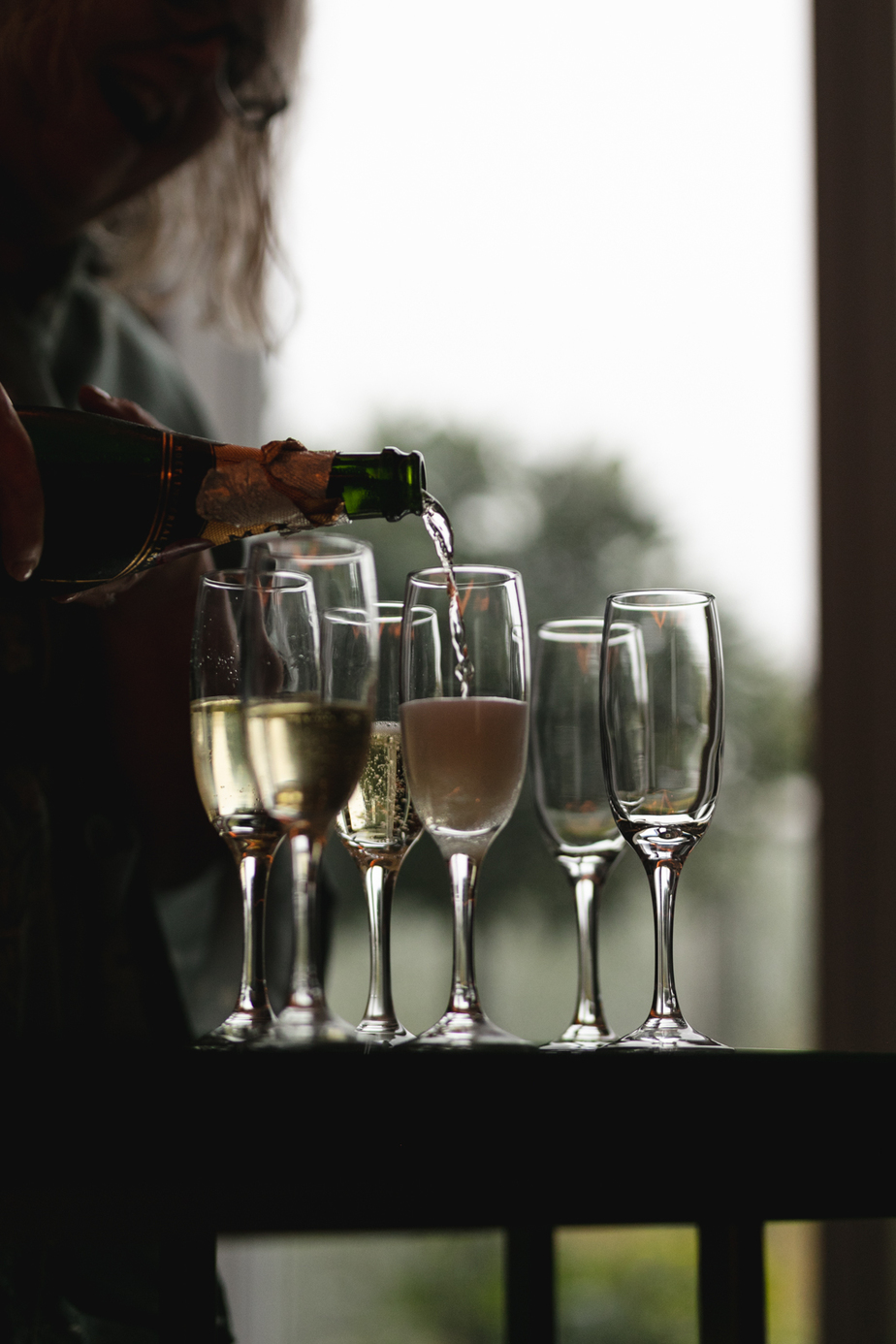 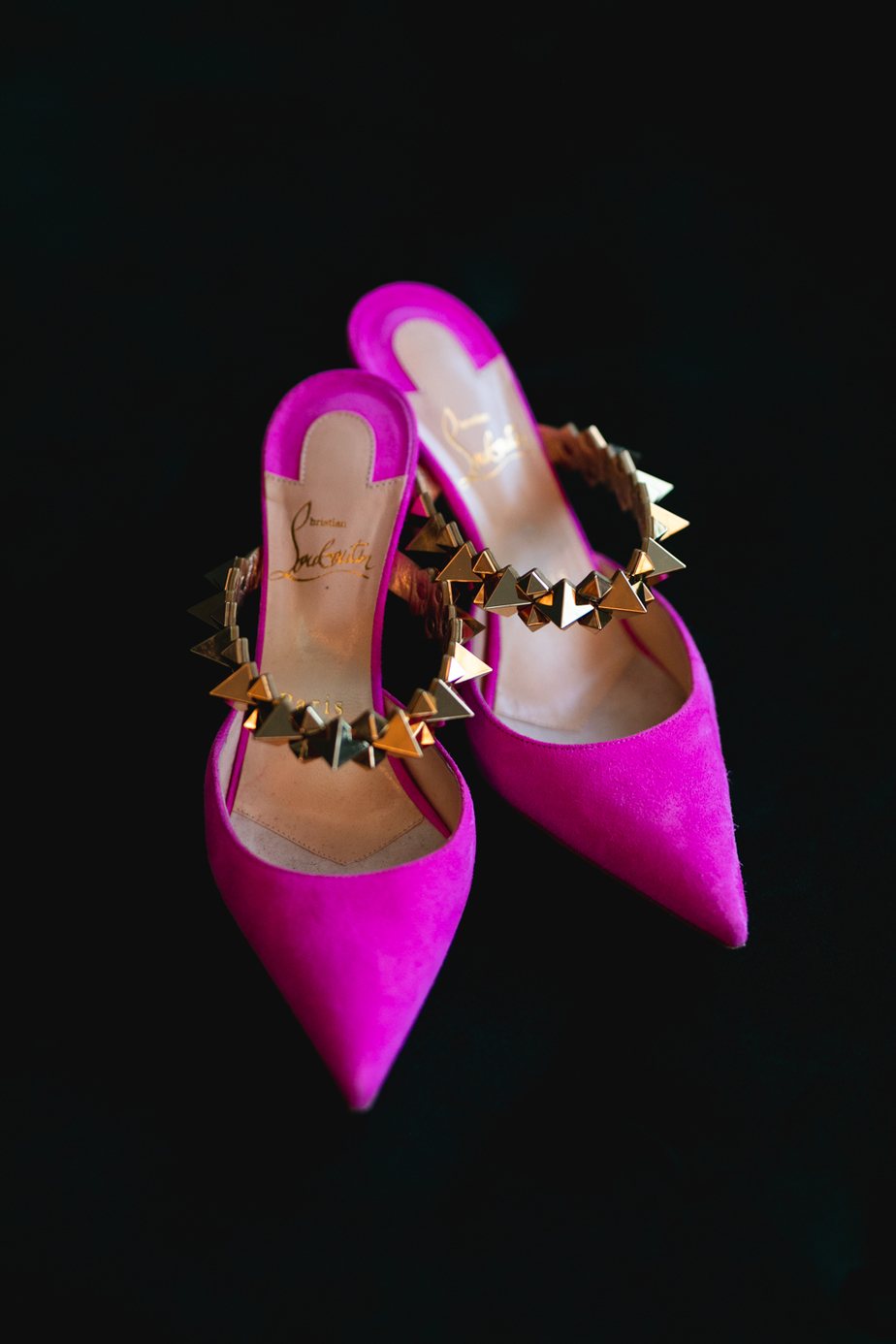 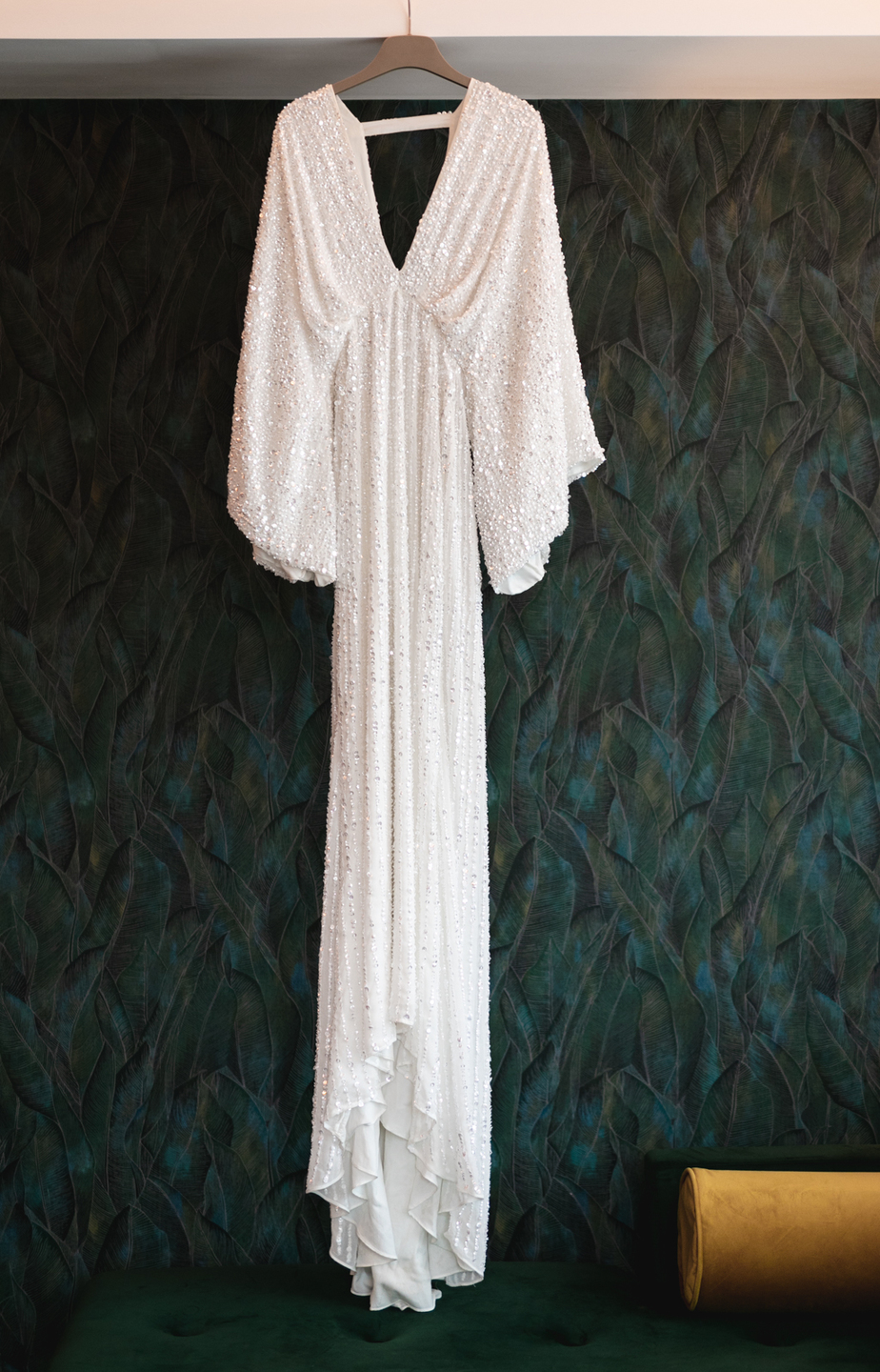 We asked the lovely couple how they met and Sarah, who hails from Tipperary says she connected with Emmett from Dublin the old fashioned way – online! “We met like every other couple these days… on the apps! We met on Bumble and had our first date in Drury Buildings. From that night we were pretty much inseparable. We just clicked the instant we met and that was it. I think It was two months later, I officially moved out of my place and in with Emmett. Then we got our baby Ollie, our four-year-old French Bulldog-Staffy mix!” 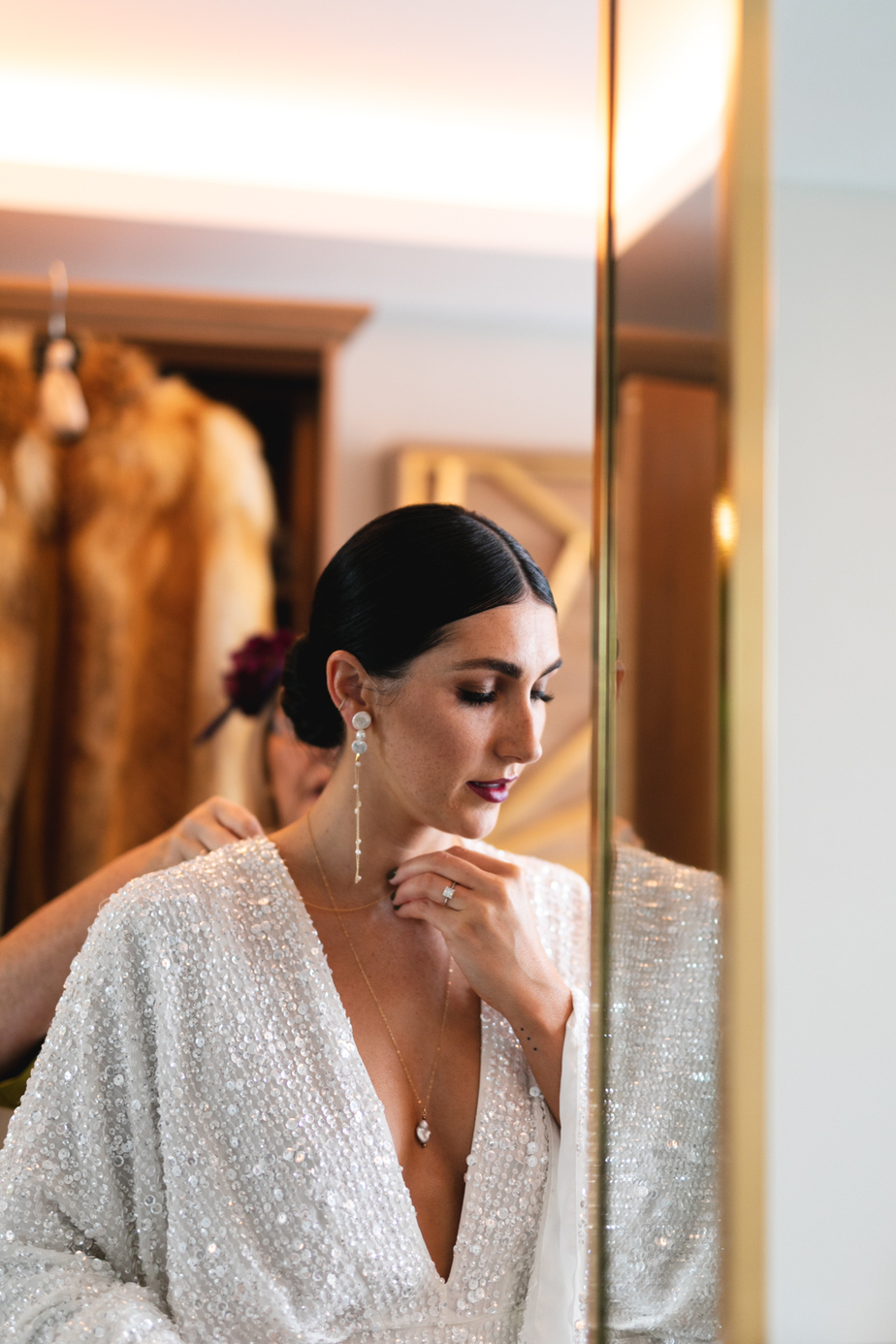 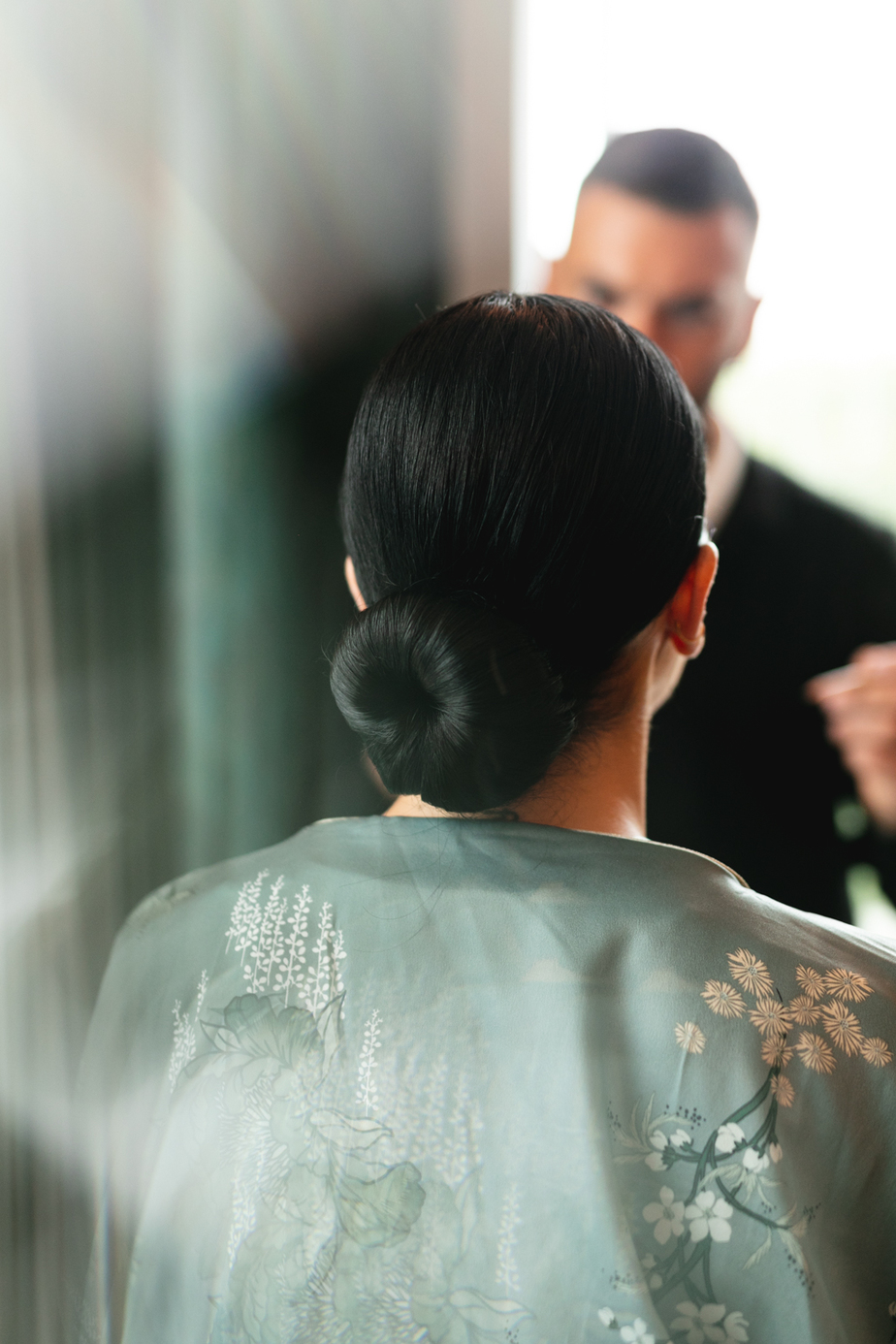 Ollie of course had to be included in their day and was even on the ceremony. “Our friend who was looking after him brought him to the venue after the ceremony ended. The timing was amazing. We had literally just come down the stairs still in a complete daze after the emotional ceremony, the front door opens and in runs our baby ,” says Sarah. 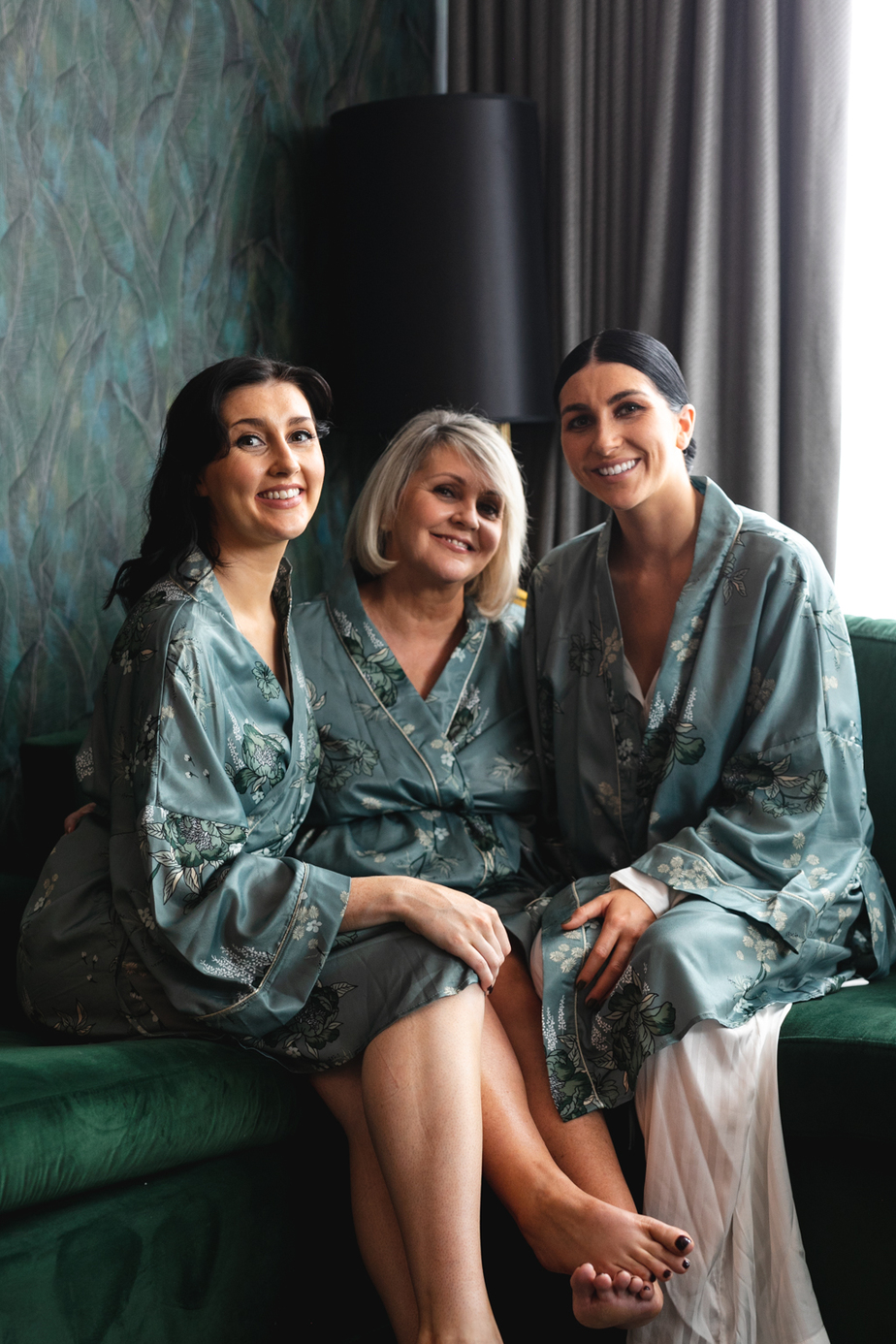 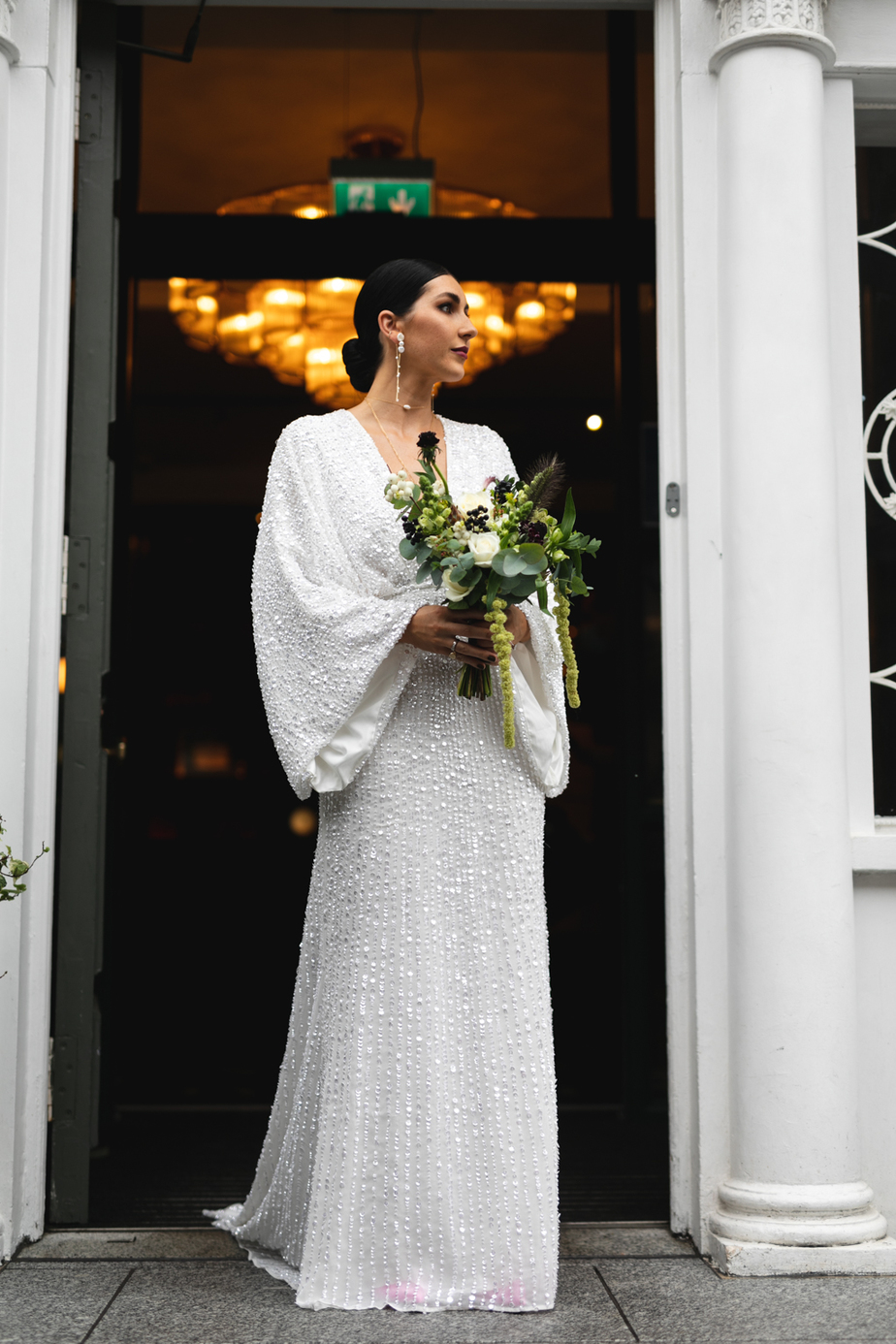 Sarah’s dress for her ceremony was a stunner, as the beautiful sequin embellishment lent a Gatsby-esque vibe. But why have one gorgeous dress, when you can have two, as she went for a halter-neck style for the evening celebrations. Sarah sourced both dresses on ASOS. “Due to the pandemic dress shopping was slightly limited, and I found it so difficult to find something that I really felt like myself in.” We think more than achieved the goal, because she certainly added her own twist with her divine hot pink Christian Louboutin heels. 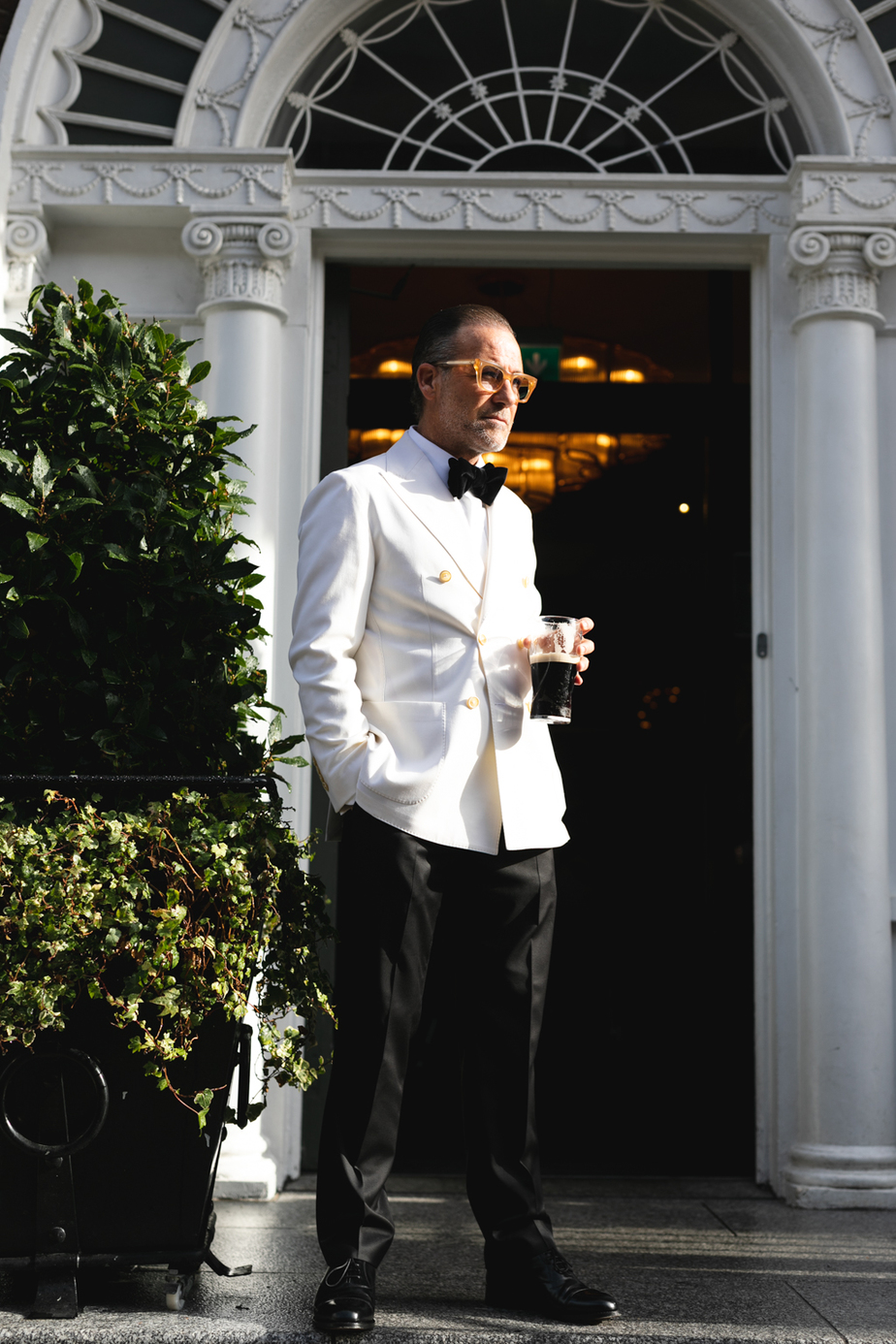 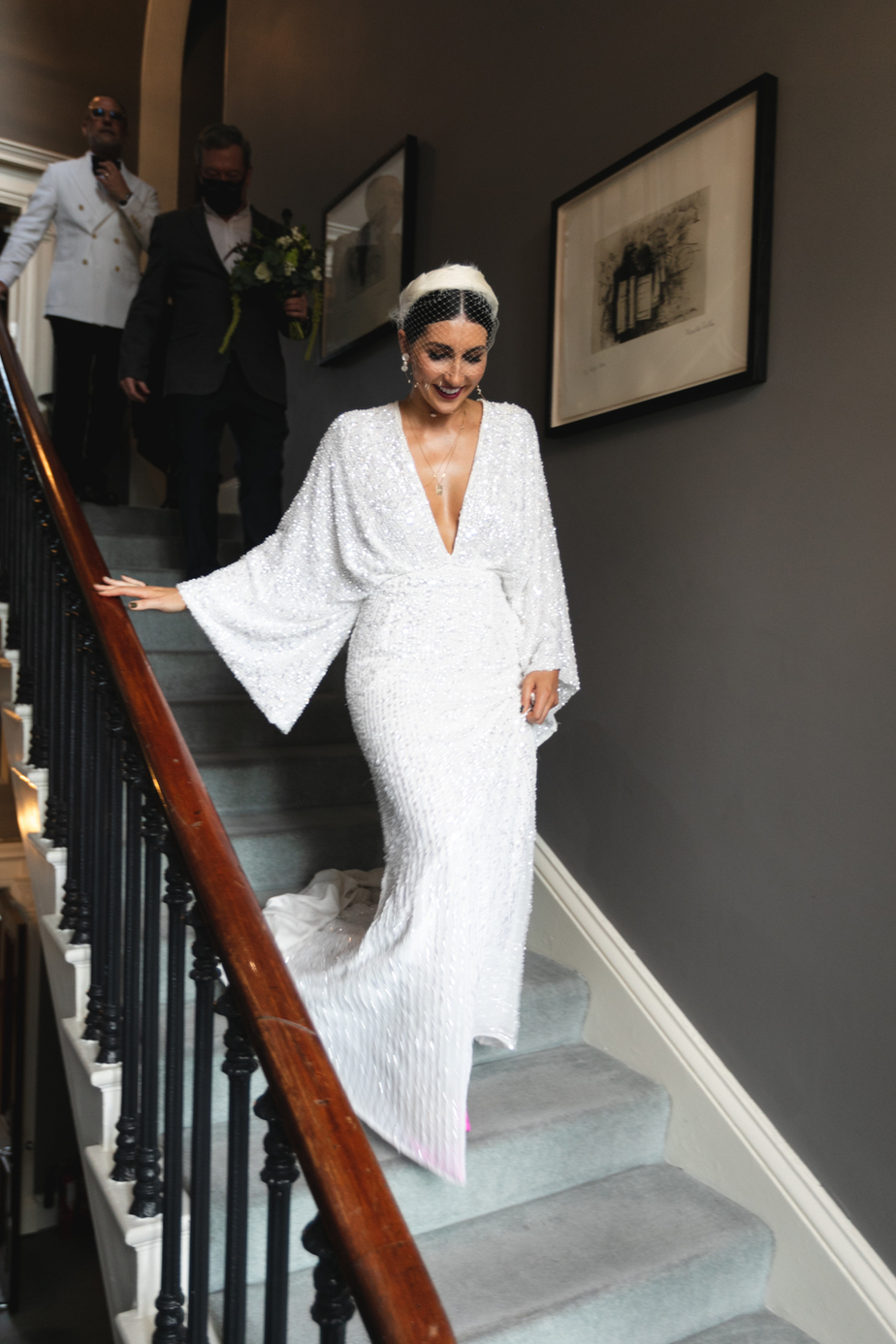 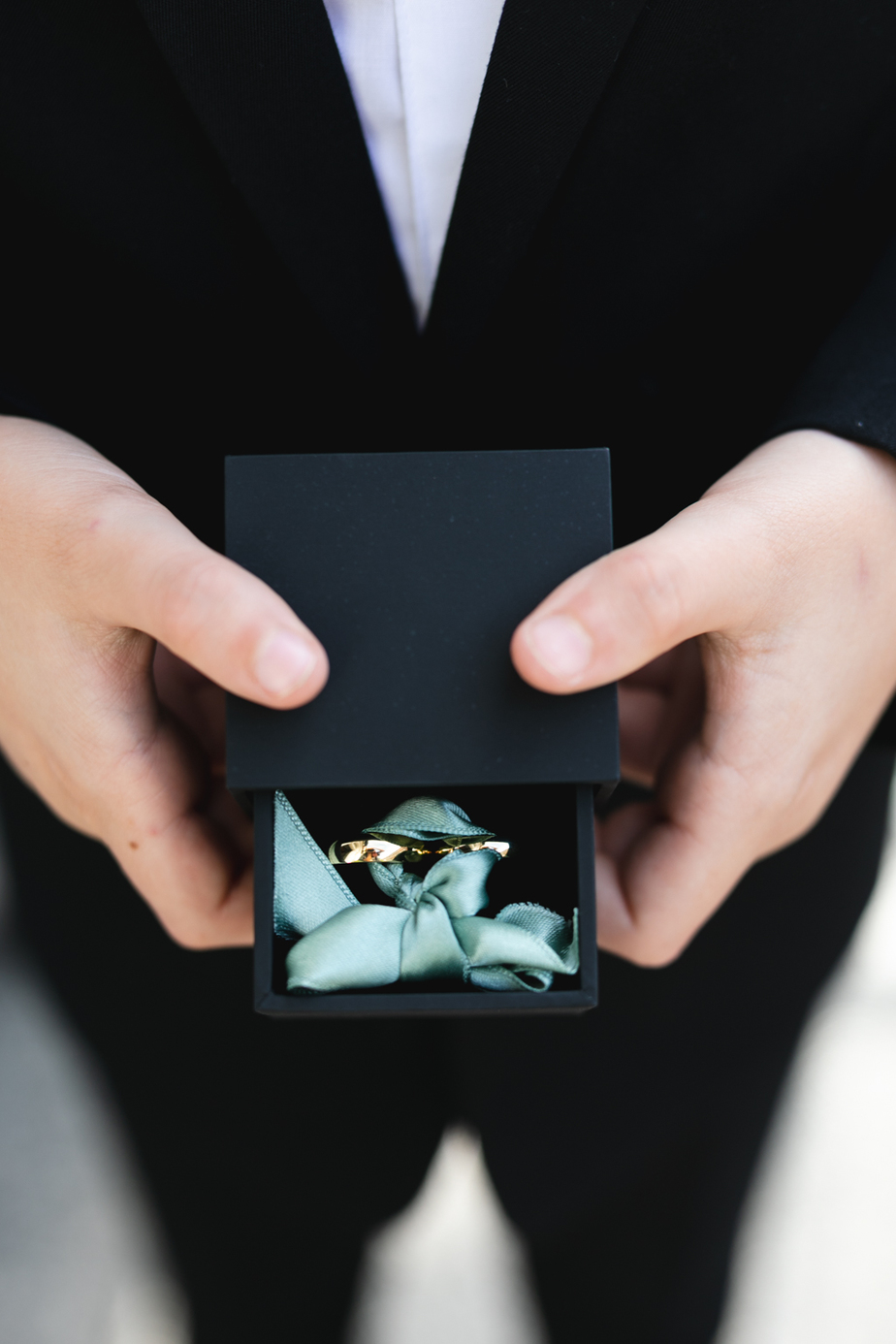 Emmett’s suit, meanwhile, was a stylish mix and match effort from Brown Thomas. His white tuxedo jacket is from Eleventy, while his trousers, shirt and bow tie are Tom Ford. 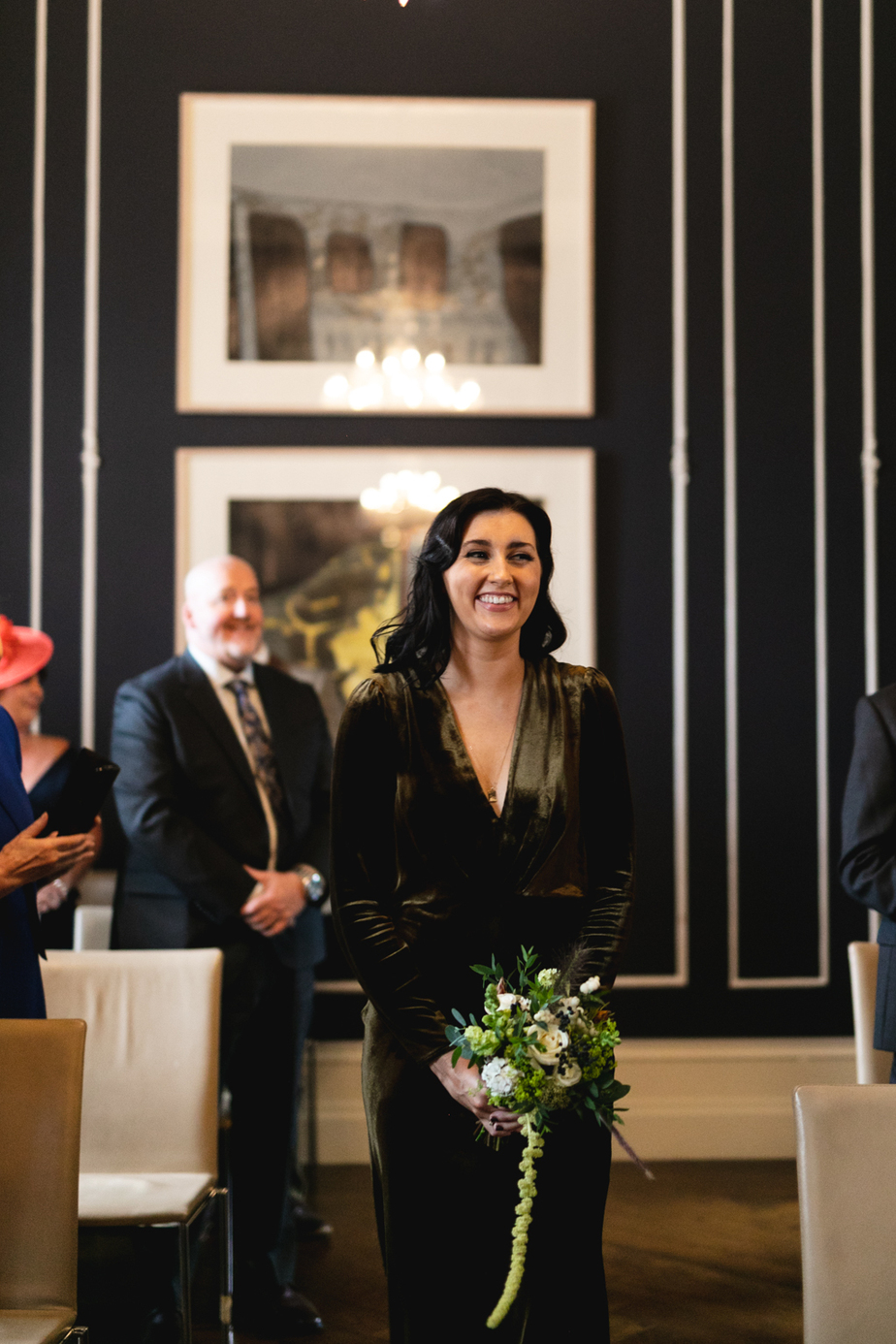 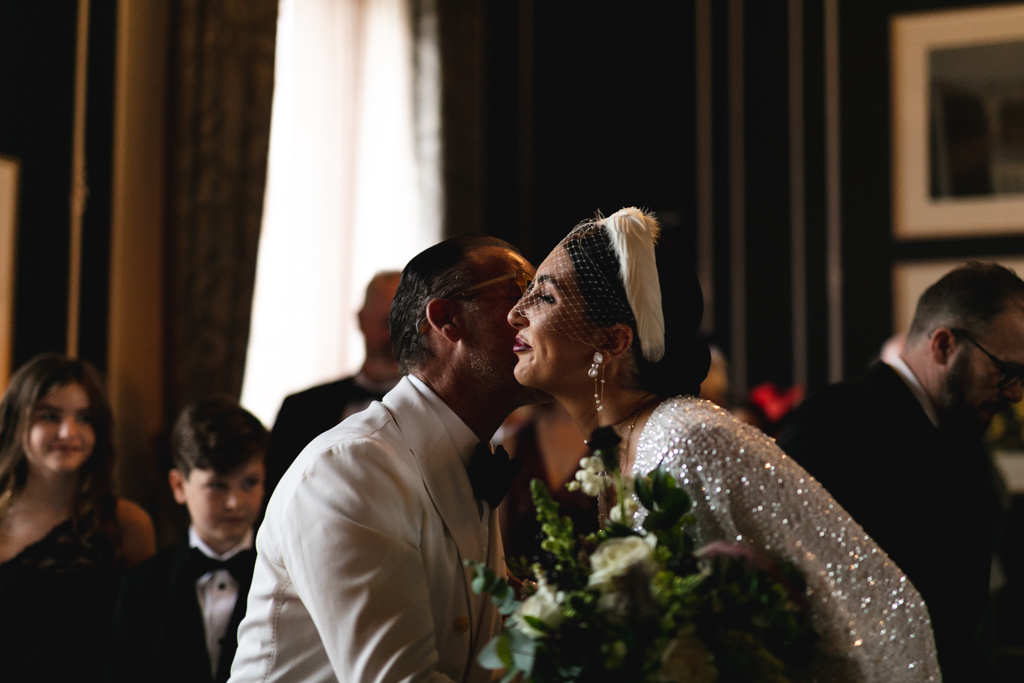 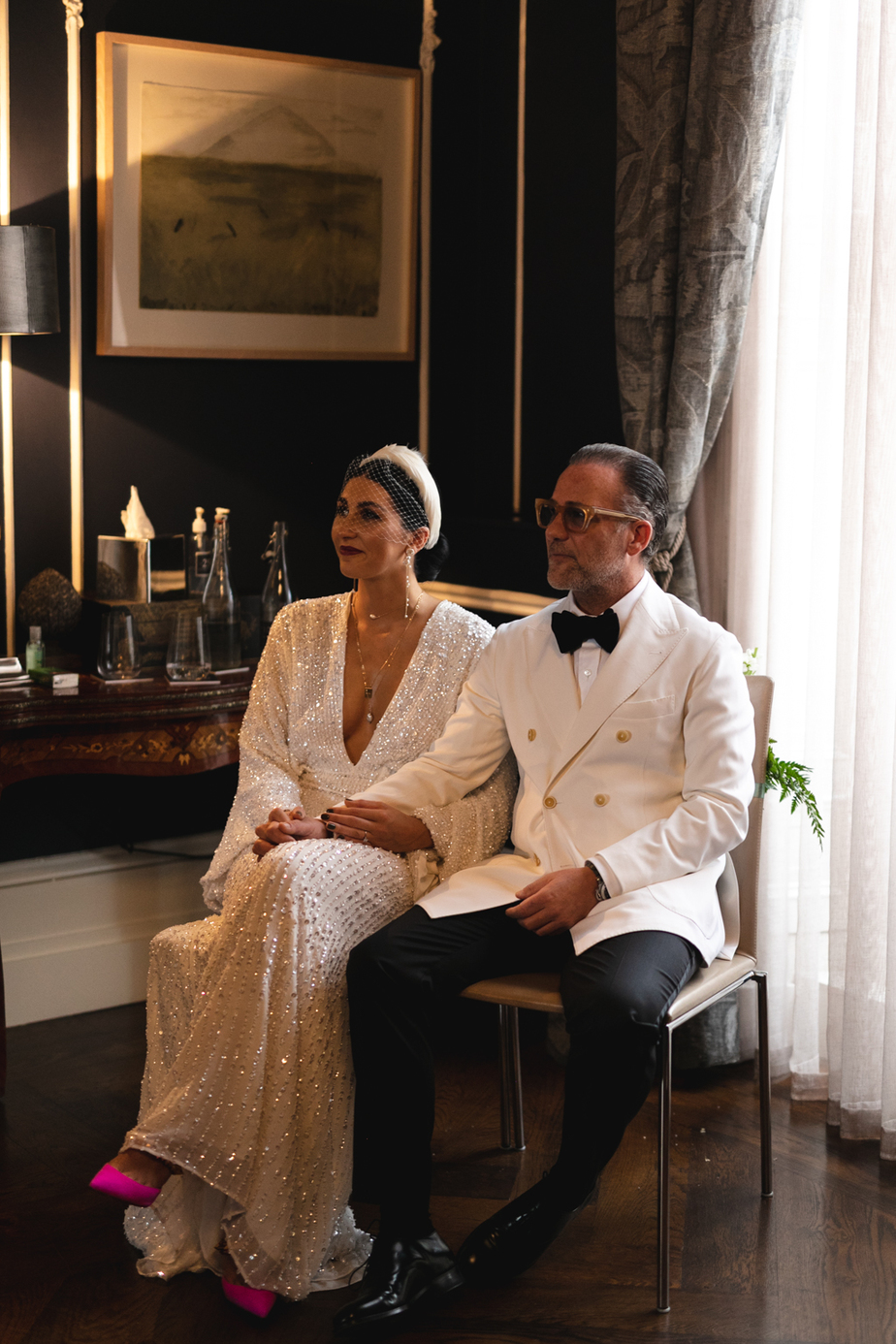 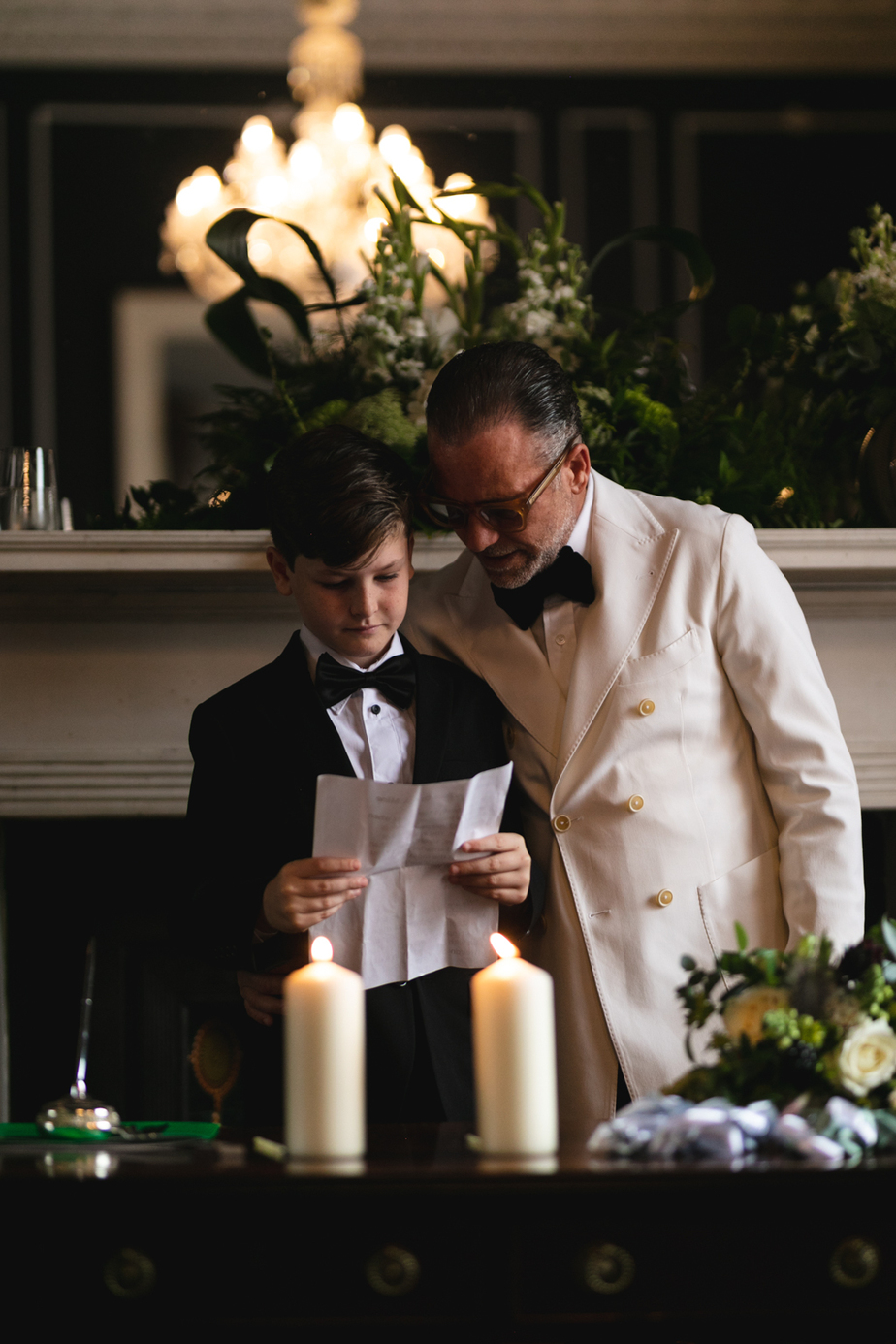 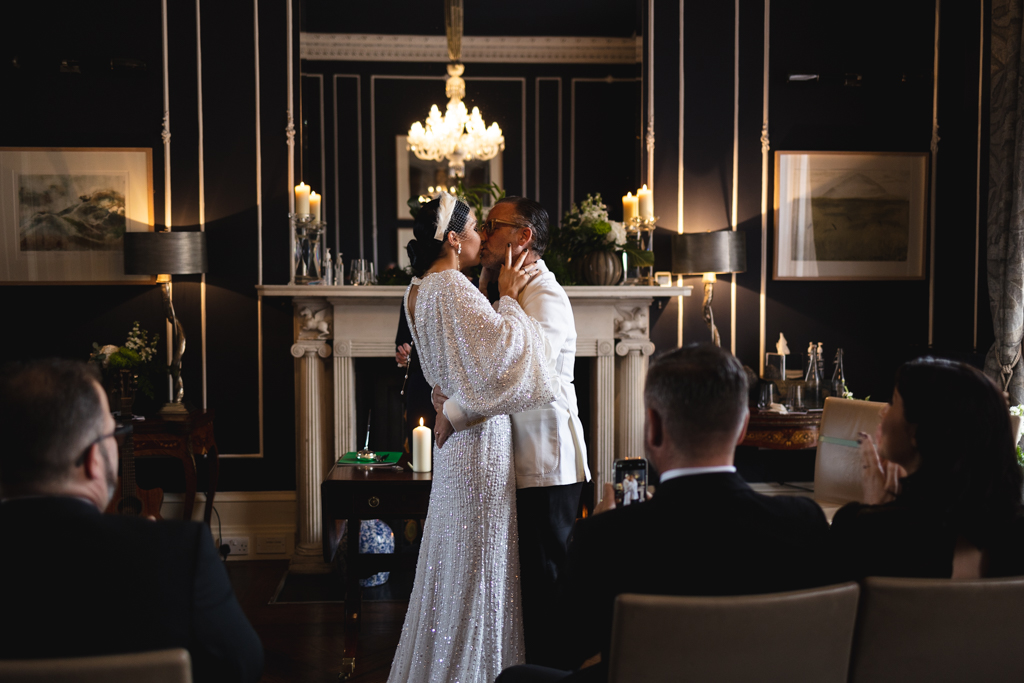 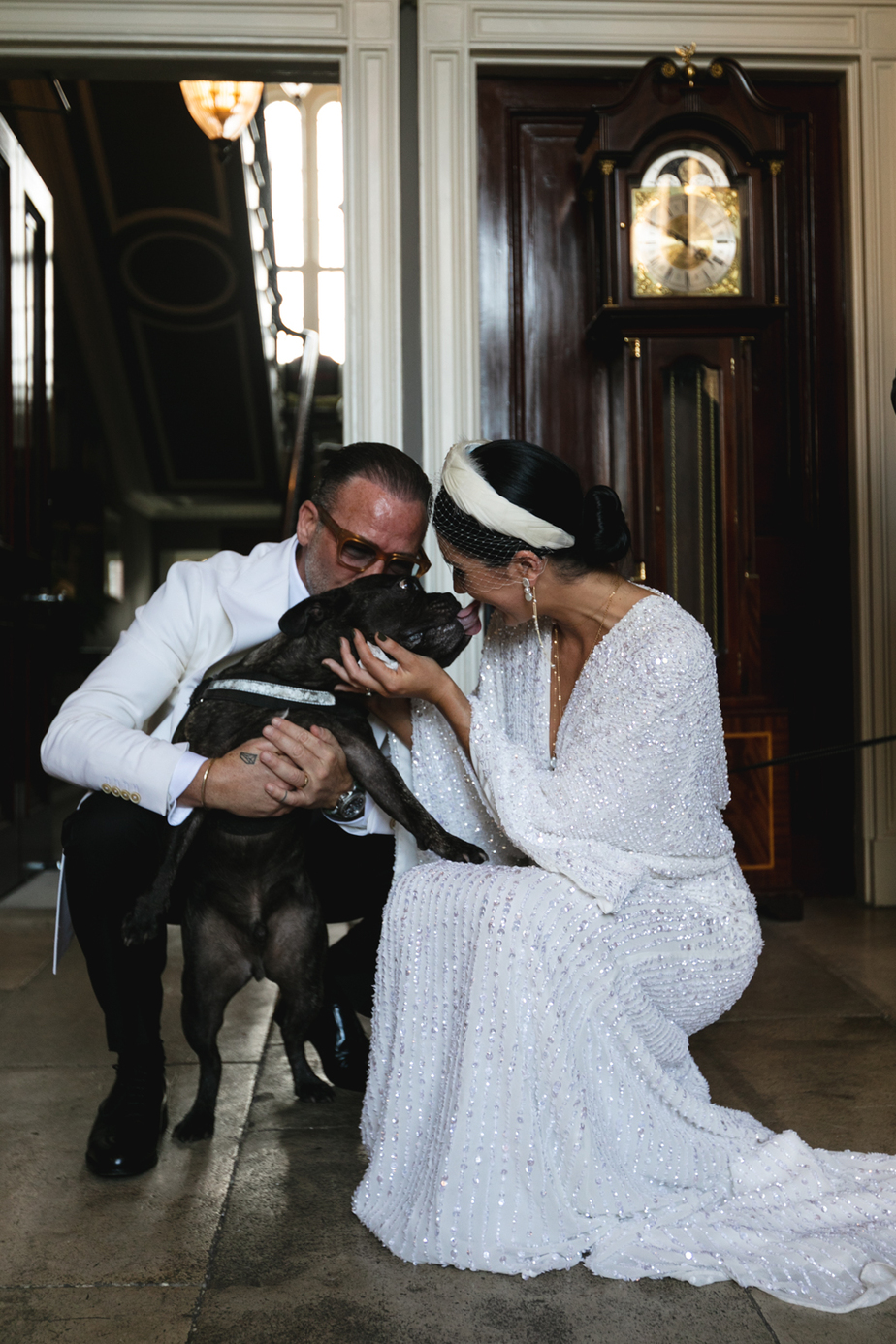 The proposal, Sarah says, “was very traditionally… us.” The couple would always end a night out with a cup of tea and a chat in the tiny, plant-filled courtyard they were living in at the time. “That night was no exception, until Emmett disappeared inside and came back out, got down on one knee, popped the box on my lap and asked ‘are we gonna do this?” Very casually I might add.” 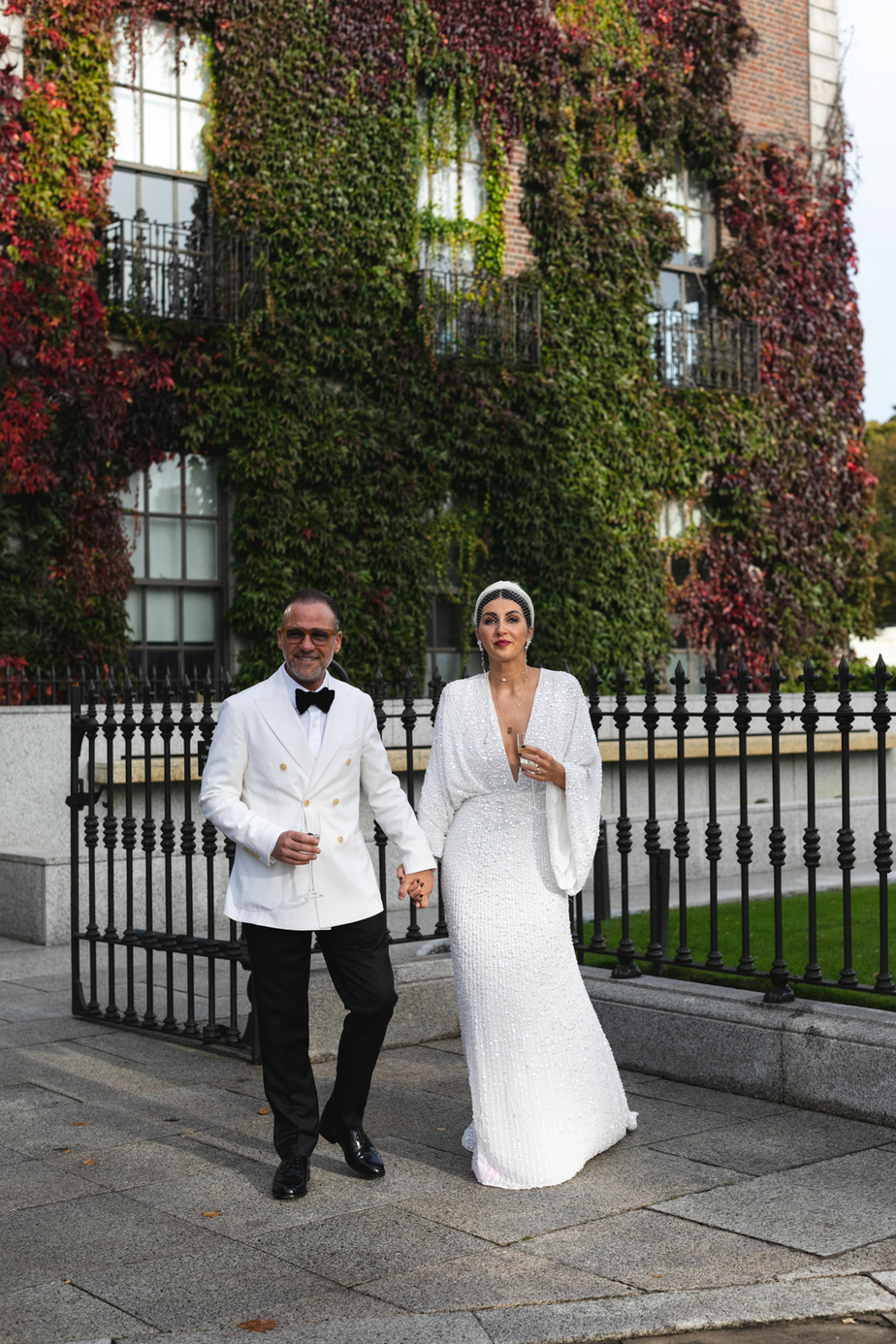 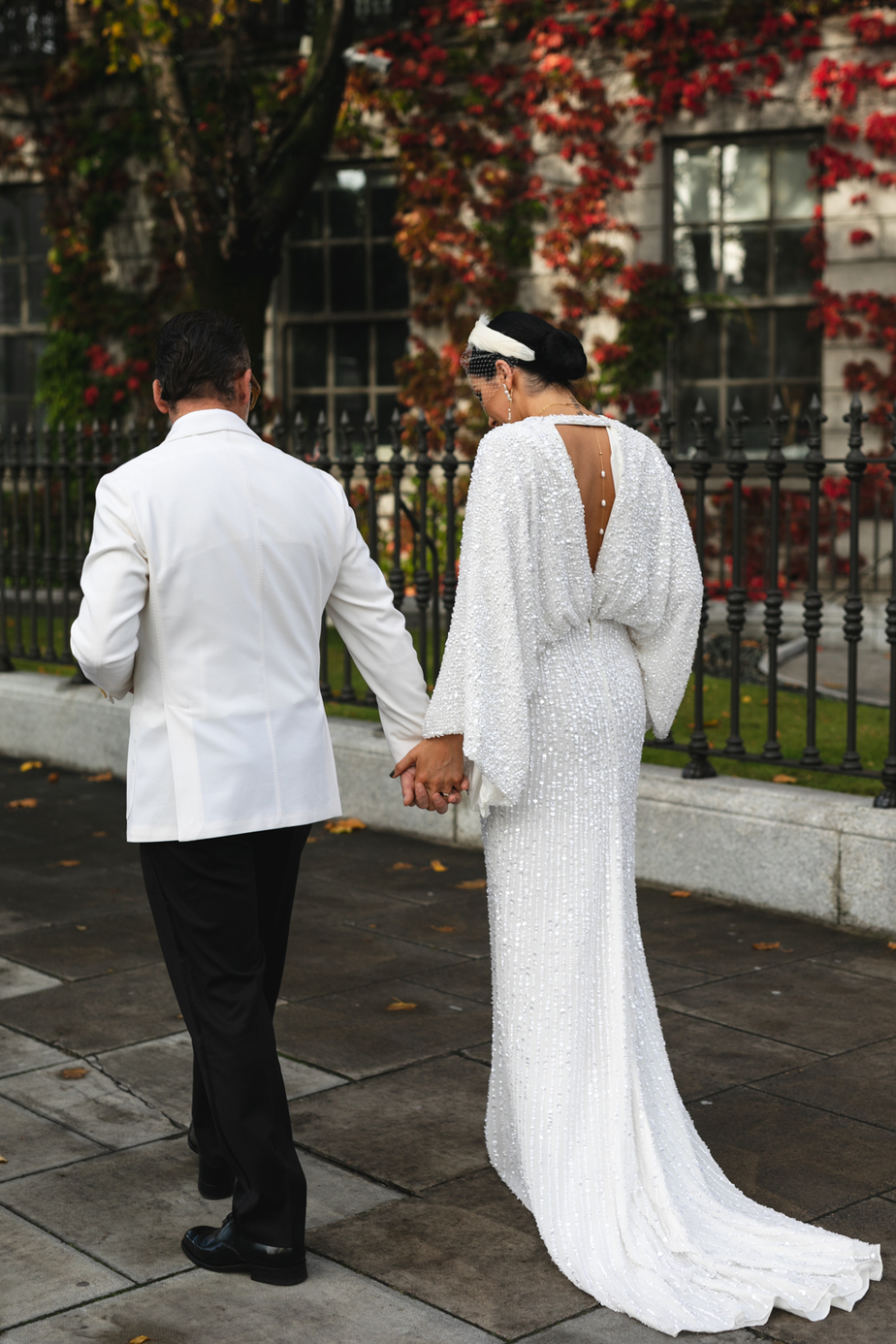 The ceremony, written by their solemniser Laura Walsh, was highly personal; Sarah’s step-dad walked her up the aisle while her uncle sang, and they had a remembrance for her father and Emmett’s grandparents. They had some special poems and songs performed by family members. They also did the warming of the rings and tying of the knot, two Celtic traditions performed by Emmett’s nieces and nephew who had traveled from Boston. 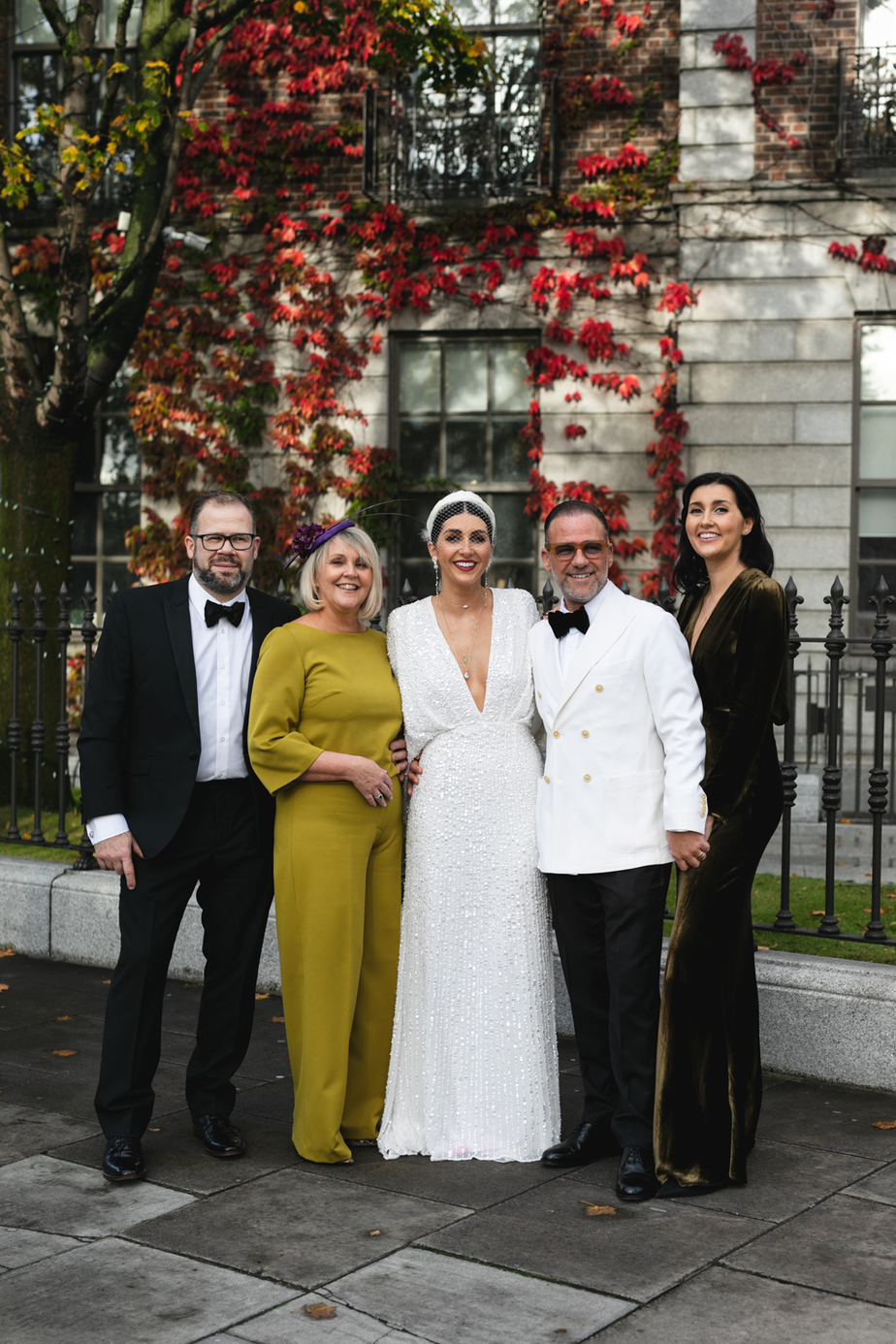 The flowers for the venue were a family effort by Sarah’s mum, her sister and herself which they sourced from Catherine and Olivia, flower vendors on Duke Street where it meets Grafton Street. Meanwhile her gorgeous bouquets were from The Garden in Powerscourt Townhouse. 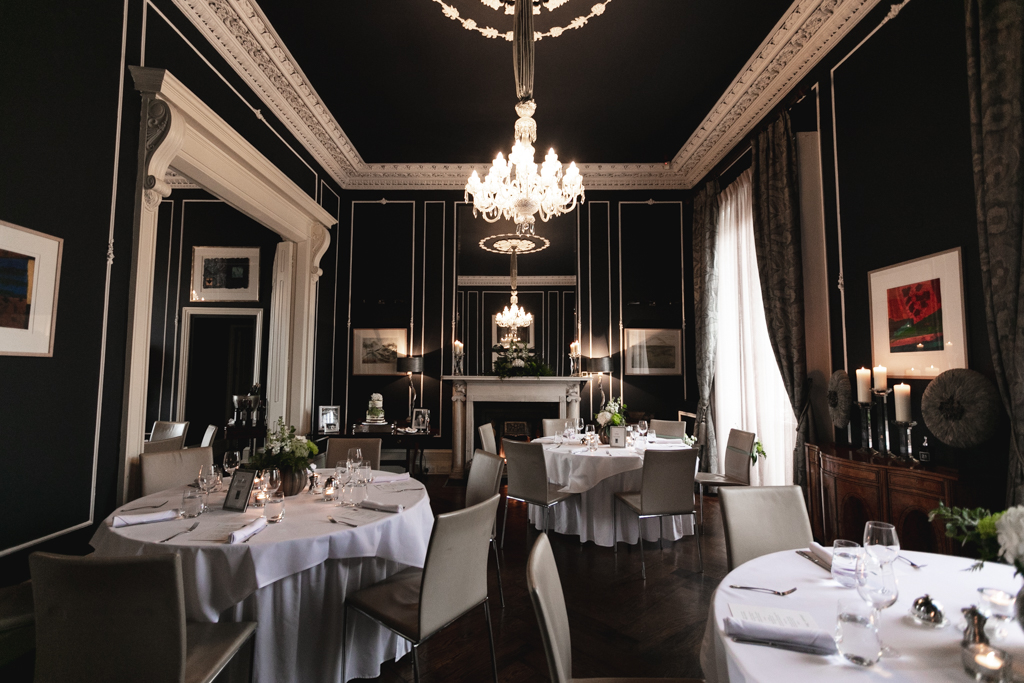 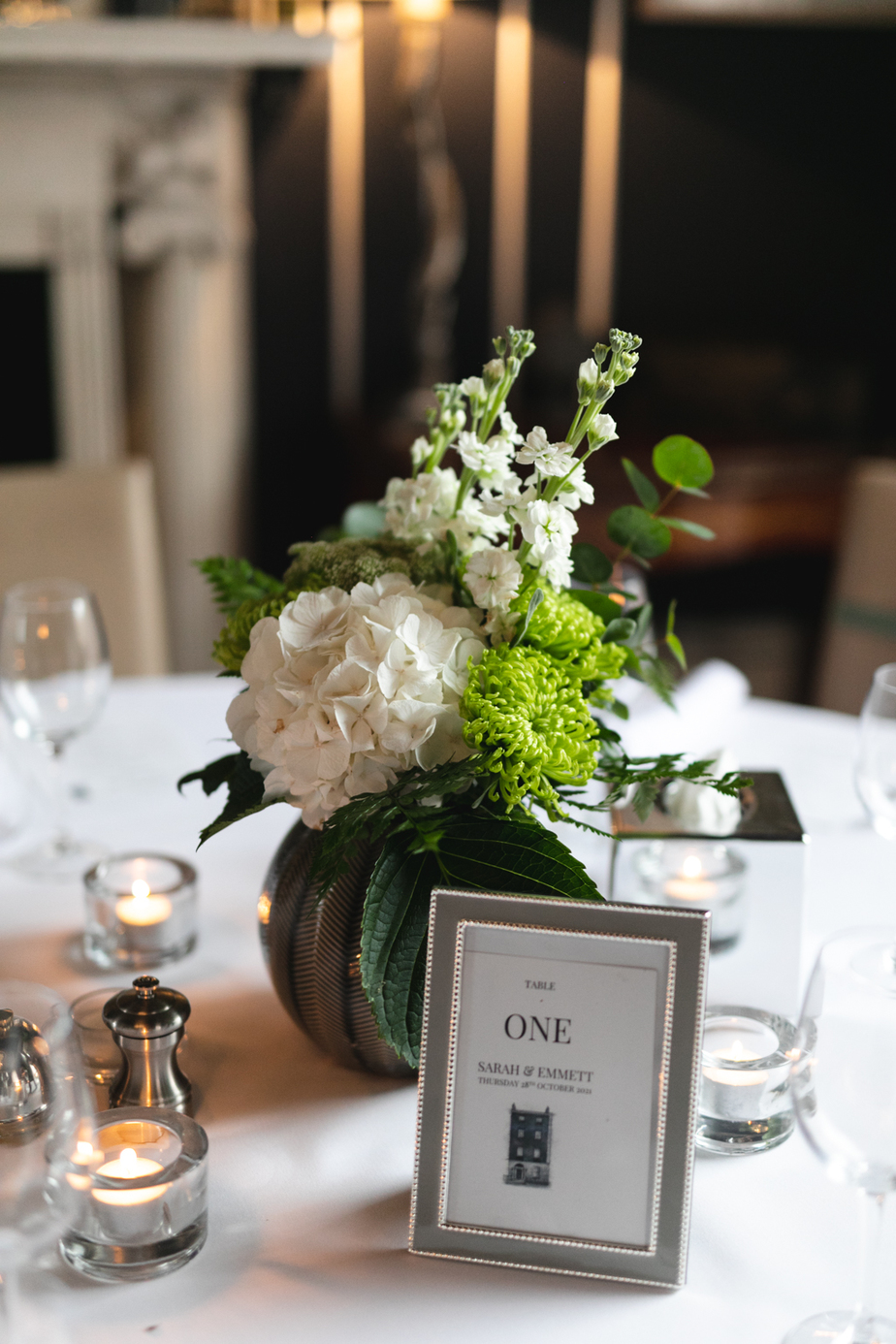 Sarah also took on the huge task of planning and styling the wedding herself, but she relished the challenge. “I loved planning every little detail, down to the edible flowers in the toast drinks and the glasses and garnishes for the gin and tonics,” says Sarah. “It’s really the small details that make the day true to you as a couple and choosing the right venue and vendors that will understand and work with you is imperative to achieve everything you want from your special day!” 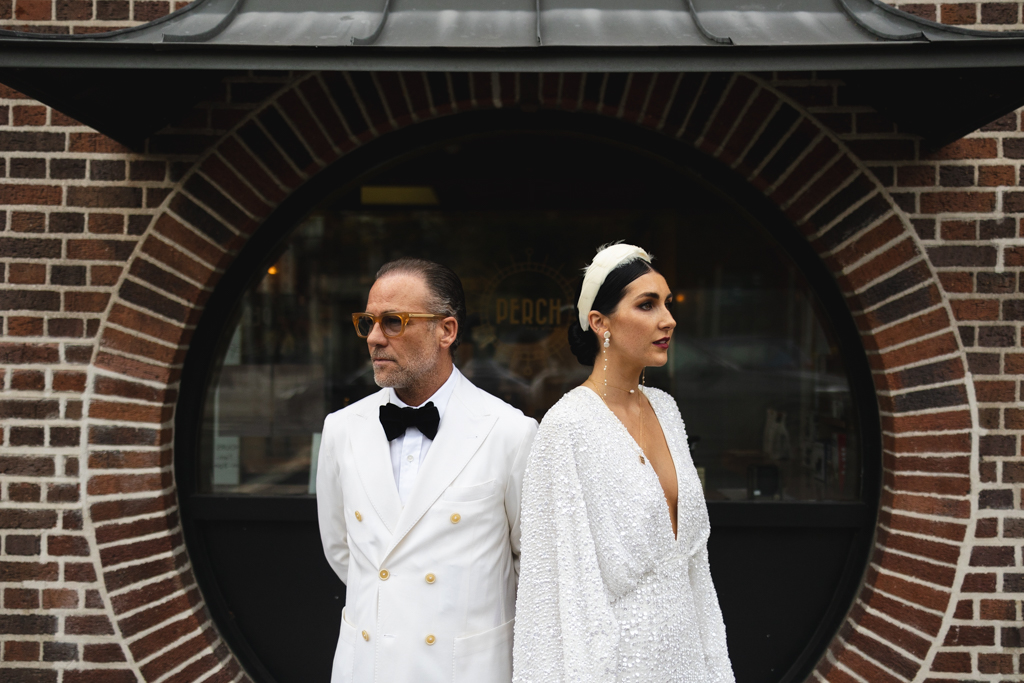 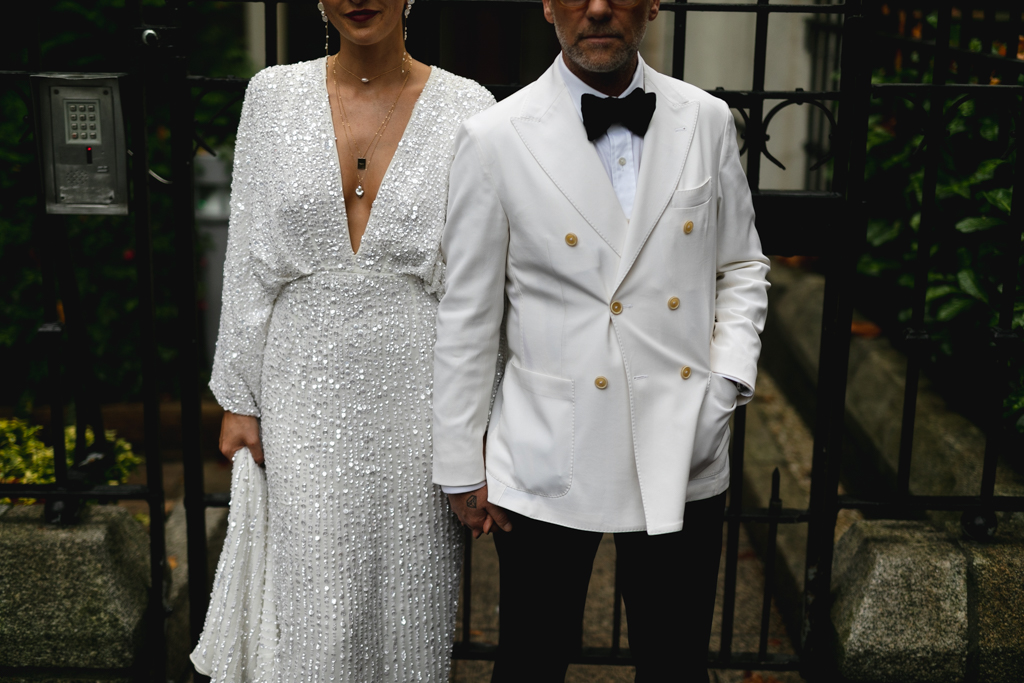 No. 25 Fitzwilliam Place really was a dream wedding venue for the couple who found the team exceptional to deal with, getting a great feeling the second they walked through the door. “The star of the show for us both was Stephen Sheridan. I genuinely cannot put into words how wonderful this man is. From the second I arrived outside the venue he was there for any whim, need or request we could possibly have! I have never experienced service and professionalism to the level that this man delivered.” 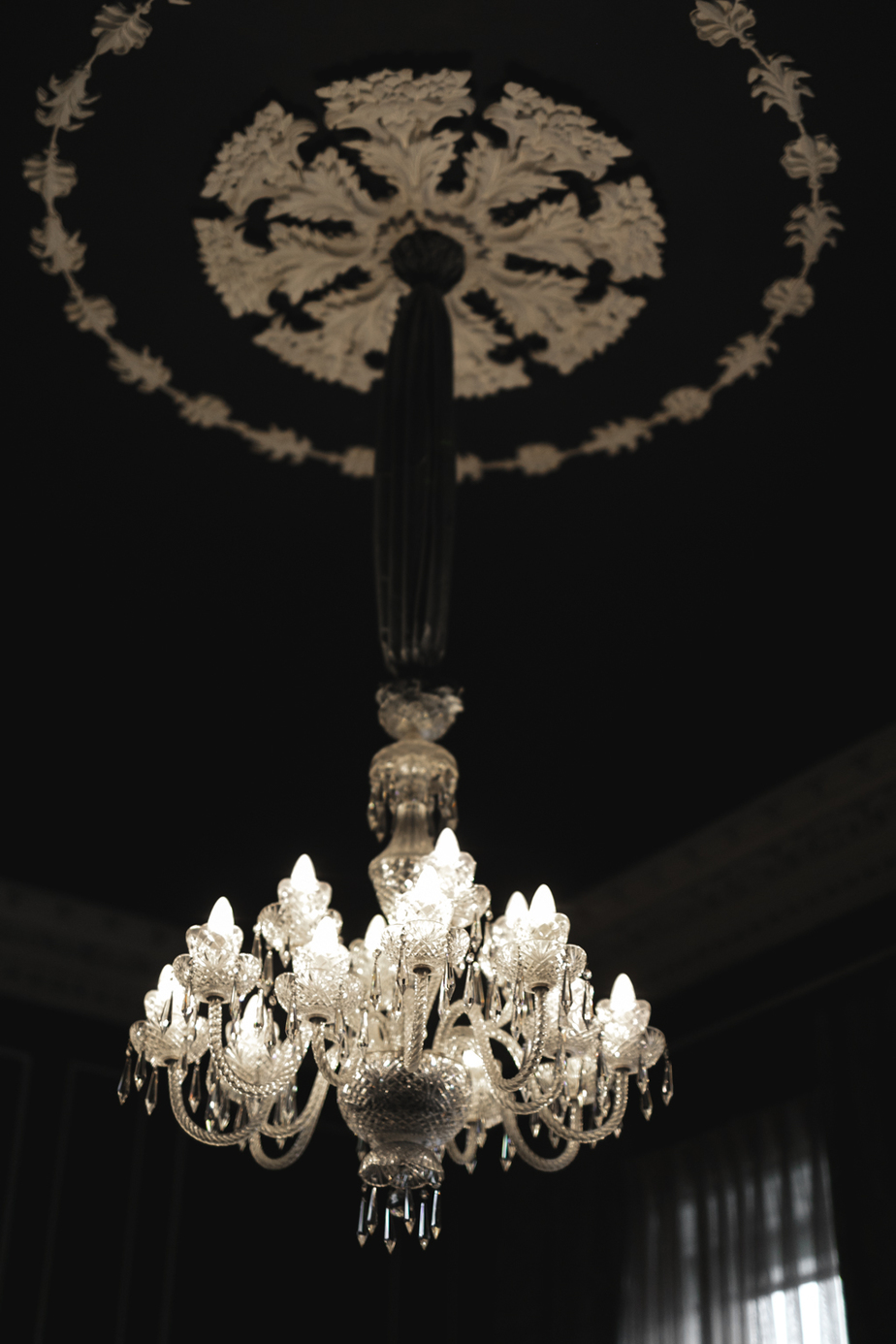 The meal was lit only by candlelight, and as they had a smaller number for the ceremony and dinner, it was time they got to spend with their parents before their friends arrived for the party. 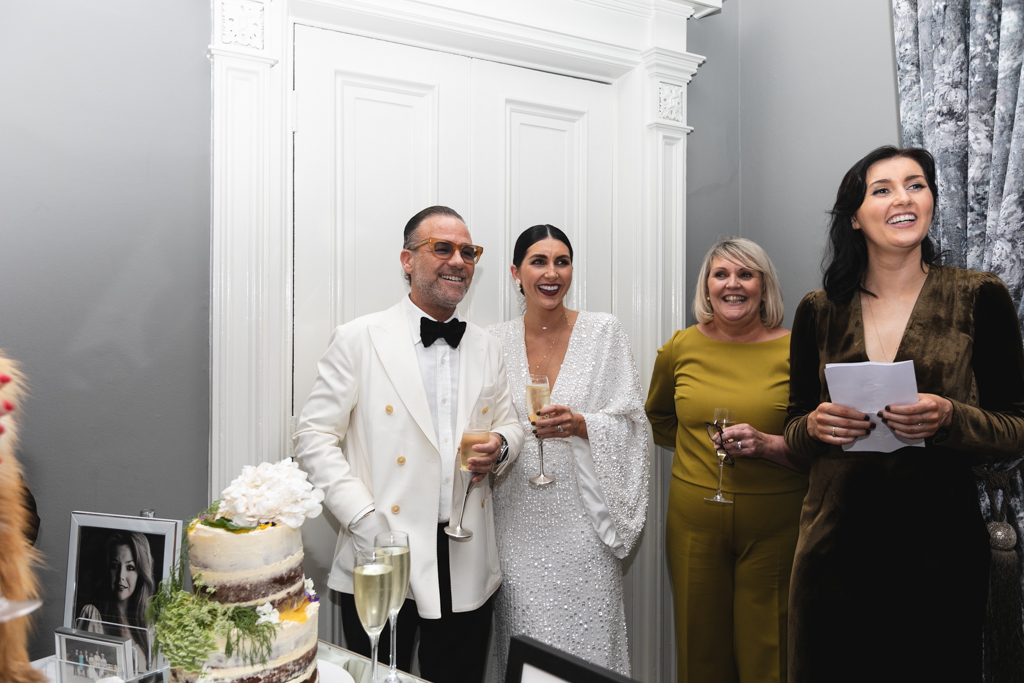 The couple describe their wedding as intimate and so happy! “You could feel the love from everyone there, the vibe was honestly electric! This was a priority. I always wanted the day to be just us and all of the people we love and that love us,” says Sarah. “The thing I tried desperately to avoid was hosting a day for people that we didn’t really want, nor they didn’t really want to be there… but I think in this country we still have a lot of this obligatory invites – politics So the one good thing about the pandemic – a guilt-free intimate wedding!”

Sarah loved that from the moment she woke up she was surrounded by friends and family, and enjoyed breakfast at the hotel with her sister, mum and step-dad. Her hair and makeup was done by two of her good friends, Derrick Carberry who did her makeup and her hair was done by Alexandra Stan. “Just before we left the hotel I get a text from Emmett, a selfie of him in the car on the way to the venue with ‘See you in a few! Let’s enjoy this & relax!’ which immediately put me at ease.” From the moment she arrived at the venue, Sarah felt all the planning was done and what would be would be! 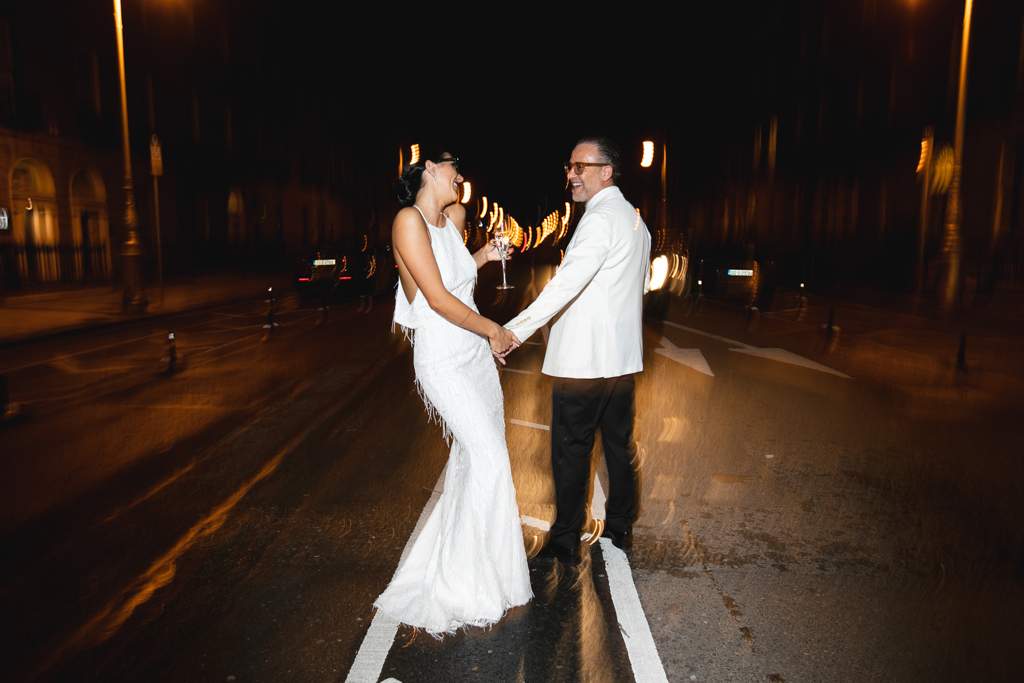 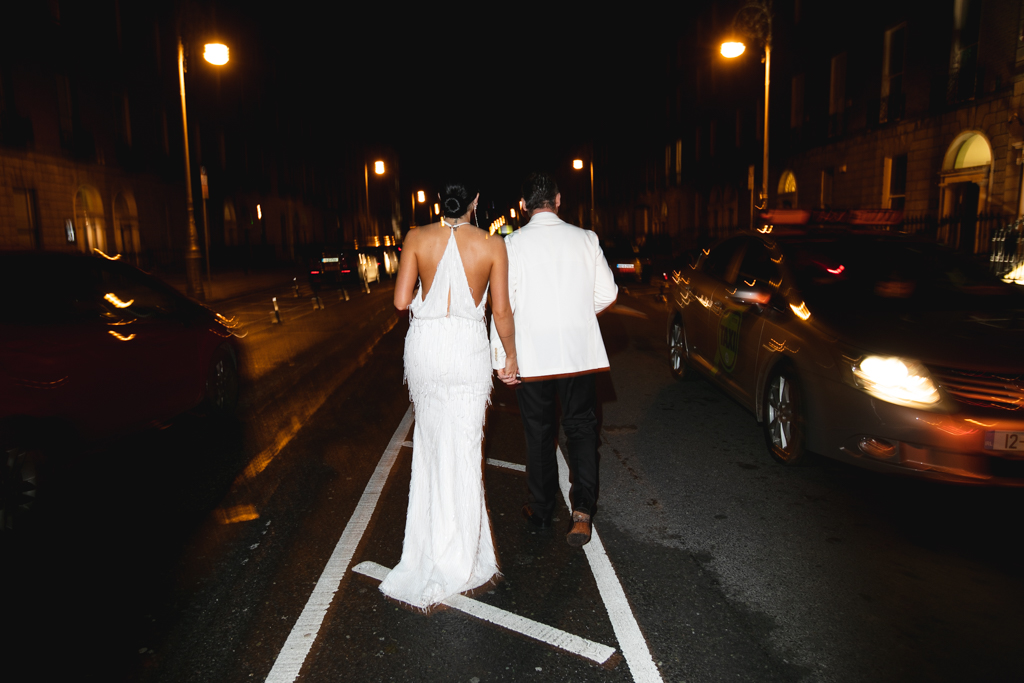 heir advice is to relax, and only include the traditions that mean something to you. “We found that involving as many people as possible in the ceremony worked really well. It made it feel more laid back and inclusive, rather than them and us.” They’ve already done part one of their honeymoon, having visited Seville to take in the sunshine, stunning architecture and slower pace of life. “We treated ourselves to a suite in Palacio de Villapanés which was really stunning and our favorite things we did there were the Royal Alcazar and the AIR Ancient Baths!” Next, it’s Mykonos for part two. 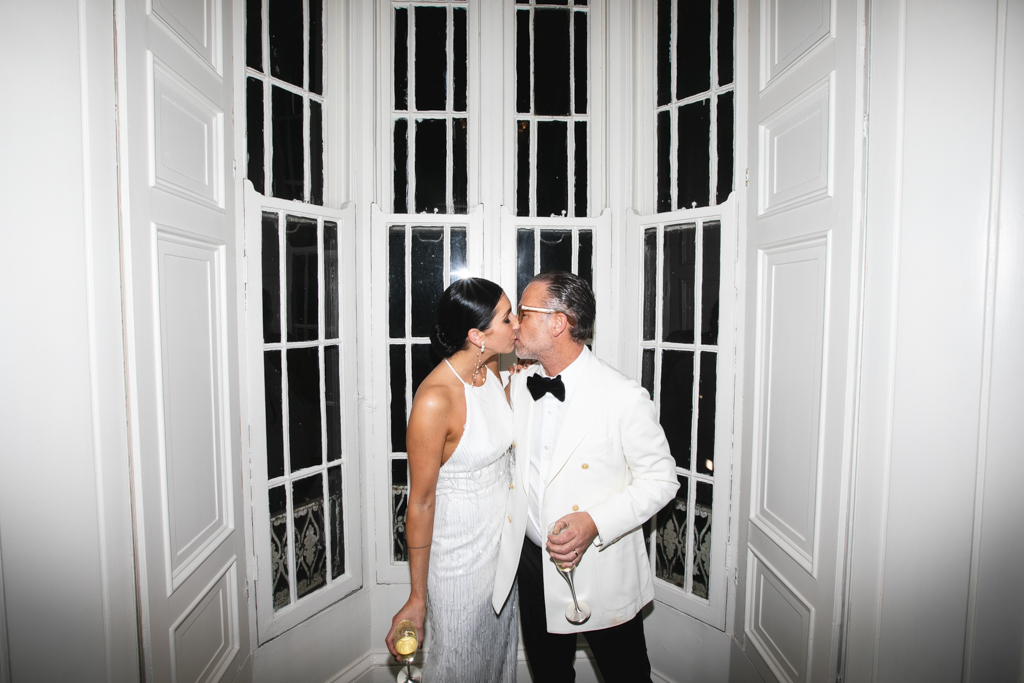 A huge thank you to Sarah and Emmett for sharing their gorgeous No. 25 Fitzwilliam Place wedding with us. A big shout out also goes to Wild Things Wed for these amazing images. There are more pictures to pore over below!

No comments to show.